Update: 29th June 2016
I now have another bike, and I found an old pic of my first "proper" bike, so this page will now cover all 4 of those bikes. The latest developments will be at the top of this page, with older stuff being further down. The order is:
Hoppy (my current ride, a BTwin Hoprider 300)
Mermaid (my "fill-in" bike, a Universal Mermaid)
Cinzia folder (that I rode for almost 20 years)
Falcon (my first "adult" bike)


Mermaid
My regular ride was (at the time I wrote this page) a Cinzia folding bicycle, that I purchased new from a bike shop in Walthamstow, East London, in the early 1990's.
Following a frame failure (theoretically repairable, but far from economically sensible), I was riding Mermaid.
So this page was about Mermaid, which I rode to work every day, and in 2015, I rode Mermaid on the 100km route of the local Tour de Vale, the BHF London to Brighton Bike Ride, and a 200km "Audax" / "Randonnee" ride. Some of Mermaid's parts now feature on my current bike.
Pics of the Cinzia folder are further down the page, as is the story of the problems I had ...

Cinzia
And now some "archive" pics of my Cinzia in happier times ...
It's one of those relatively cheap, U-frame, bikes that were available at that time.
I used to live in various bedsits in North London, and I wanted a bike that

My Cinzia has 20-inch wheels, and a three-speed Sturmey-Archer hub gear, and came with a propstand and built-in dynamo lights.
Luxury, for only about (if I recall correctly) 120 quid :-)

Some of the features on the bike show off its age - it has cotter pins, steel brake levers and side-pull calliper brakes - you don't see those around much these days!
The rear brake cable and dynamo wiring are routed inside the frame (and through the hinge!), which looks neat and tidy.

The cable for the rear gears runs outside the frame, which makes me wonder if the three-speed gears were fitted later by the importer, or some such. The rear gear hub is stamped "12-88" (the month, December, and year, 1988, of manufacture), which is a good few years before I bought the bike.

The dynamo lights are nice, but the front light is a little feeble by modern standards - the lights themselves are French.
The rear light mounts to the rear mudguard, and the front light is mounted on the front mudguard (they are ftted with the original bulbs, by the way)

Cinzia make a similar bike today, although it doesn't seem to be currently imported into the UK: http://www.ciclicinzia.it/uk/bicicletta-cinzia.asp
Look under "Products", then "City Bike", then "20 Pieghevole", and open the pdf.
The current models are a single-speed and a 6 speed derailleur version, which are very similar to my 20-year-old model, except that mine has a 3-speed hub rather than a derailleur.

Quite a few times I rode my Cinzia in London from the Bounds Green area, near the North Circular, through Highgate, and down to the West End - a journey of about 8 miles each way. Quite a hill at Highgate, as I'm sure anyone who has tried to cycle up it will know :-)
I cycled in a couple of times to see the New Year's Day parade, and as you can imagine, the roads in the area were pretty clogged, so the best way of getting about Central London was by bike!

When I left London, 11 years ago, I used the bike less, but it was my back-up for work, and was used in this capacity to ride to the local station, take the train to near where I worked at the time, then cycle the last couple of miles. I would then fold the bike, and park it in a corner of the office, next to a filing cabinet.

A bit more than 6 months ago, I changed my work for a job in the town where I live, so after a few weeks of walking, my little Cinzia folder was dug out of storage and was soon working again. Now I do the two mile round trip to work once or twice a day on my Cinzia, as well as lots of extra little trips to the shops, the doctor's etc. etc.

I've changed the rear tyre (chunks were falling out of the tread on the original!), the chain (I broke 4 sideplates on the original!), the rear brake cable (the original broke!) and the saddle (now an economical, and comfortable, Lidl "air" saddle). I've fitted an extra, battery-powered, rear light, a bell, and a removable front wire basket (I like the extra carrying capacity of the basket, but I got a removable one so that the bike can still be quickly folded).

But, apart from that, the bike is pretty much how I bought it, nearly 20 years ago.

I use panniers for shopping trips for more than just a few light items. 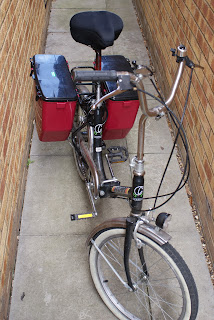 I clip a pair of Bike Bins hard plastic panniers on to the rear rack.


My review of the panniers is here - to summarise:


The repeated use of panniers cracked a weld on the original rear carrier, so I will be fitting a new carrier, sourced from a 28" wheel full-size bike :-)
Some Cinzia folders/pieghevoles have the carrier welded to the frame, and some have the bolt-on sort. Mine is the bolt-on sort, so it was just a case of finding a suitable carrier.

Update 6th April 2012:
The new rear carrier has been fitted. 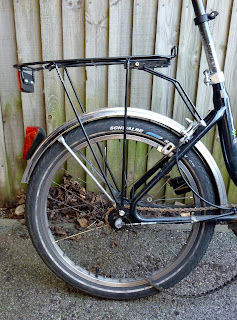 It's just a cheap, old, one from my wife's old bike (which has much larger 700c wheels!). It is higher, and a bit longer, and it sits a bit further back. It also sorts out the issues I've been having with heel clearance when using our Bike Bins pannier boxes - although the higher pannier position does make the side/kick/propstand even less stable!
(the picture was taken while I was replacing the bearings in the bottom bracket, so that's why the chain is hanging loose! - the bottom bracket is, of course, a 36mm "Italian" fitting, rather than the more normal "BSA" fitting, and you should have seen the look the mechanic at Halfords gave me when I said it has a right-hand screw on BOTH bearing cups.)

With front basket and rear panniers, total load capacity is about 15kg (33 lbs), which is pretty decent.


Update 25th August 2013:
A couple of new pics showing the current specification of my Cinzia folding bike.
It now has a Steco front rack, a Shimano hub dynamo, and an LED front light.
It also has the Schwalbe Marathon rear tyre and the SRAM chain I fitted a couple of years ago. In the first shot you can see the extra battery light I have taped with gaffer tape (think "duct tape", and you're about right!) to the rear carrier as a backup - although I haven't used it since I fitted the Shimano hub dynamo and the LED front light.

Update 13th October 2013:
Tragedy
When the bearings've gone and you can't go on
Its tragedy
When the bike breaks up and you don't know why
Its hard to bear
With no way to fix it you're
Going nowhere
Tragedy
(with apologies to Mr Gibb et. al)

As I was just starting to cycle to work on the evening of the 8th February, there was a sort of grinding crunch sound, and the bottom bracket pulled away from the main U-frame.
It isn't just a failed weld, as the bottom bracket took a section of the metal from the bottom of the frame with it.

At the moment I am stripping parts from the frame of the Cinzia.
I will leave this page as it is, as a record of what was, and continue the tale under a new page entitled "The Spare Bike" (update: this actually became "All about Mermaid")

My father bought me the bike, second-hand, in 1977, and it was originally a 5-speed. But you know how things are - a "double" chainwheel followed!