The best bike I never bought (yet!) 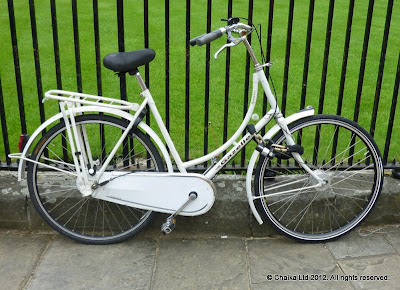 I saw a Gazelle the last time I was in Oxford - no, not a fast moving animal in a zoo park, but a Dutch bike locked to some railings!

Look at the simple, practical, features it has:

So I looked into buying one - it has many of the features that I would want from a bike. I'm more of a "shopper" than the "racer" I was thirty and more years ago. "Comfy" has replaced "fast" in my buying list!

There are several companies that sell Gazelle cycles in the UK, including this one in London.
The Gazelle Basic 3 speed has a 3-speed (obviously!) rear hub gear, combined with a rear coaster brake (also known as a "back-pedal brake"), a front drum brake and hub dynamo, and a built-in lock (you can just see it in my picture, in front of the carrier). Skirt guards and built-in lights included. It is available (for 2012) in black, yellow, pink and dark blue (so, sorry, no white like the one I saw, at least not according to Gazelle! - there could be "new old stock" models from previous years floating about, so you might yet find one).

It is competively priced at about 450 Pounds Sterling (c. 570 Euros, so it should be about 750 US Dollars, but it's actually more like 1000 US Dollars - I guess it is one of the few things that costs LESS in Europe!).
If you think that is expensive, just try sourcing all the components and adding it all up!
Also be careful with exactly what the specification of the bike you buy is - there are several similar variations of this bike, some of which have a regular "bottle" dynamo on the front wheel, rather than the hub dynamo - and make sure you get a three-speed, as a one-speed also exists. The model I have mentioned is an R3T, but double check with the seller to make sure - the ones for 450 pounds seem to be the "full" spec, but some dealers advertise them for as little as 400 pounds, but on closer analysis, it turns out to be a lower spec variant, with the (lovely) hub dynamo being the first thing to go!

So it is great.

But I will not be buying one at the moment.

Quite simply, despite the total loveliness of the Gazelle Basic, and it having just about all the features that I would be looking for in a bike, I already have a bike, and that serves me quite fine. If my bike was ever stolen (you must be even odder than me to nick my bike!), or broken beyond economic repair, then I'd be on that Gazelle in a flash.
But until then, my money stays in the bank.

If you are interested, you can read a review on an older Gazelle here, and a lot of it is going to apply to the current model as well.
Posted by Pedal Pusher at 20:32