I've just made an order, and there is some good stuff at reasonable prices.

For me the stand-out bargain has to be their "own brand" Revolution Air Track Pump Sport, for just £9.99.
I already have one of these, and I paid £17.99 for it.
At £17.99 it is a great pump, and, in my opinion, well worth the money. It also has replaceable seals, etc. so it can be rebuilt when it wears out, rather than just thrown away like other cheap pumps.
But like I said, at £18 it is a bargain.
At the current price of a tenner - it is a STEAL!
I did, however, pick up their more portable Revolution Air Mini Track Pump, down from £19.99 to just £12.99, and that's the pump that will be doing the London to Brighton Bike Ride with me later in the year

The other "unmissable" items for me are a front and rear set of Shimano Deore V-brakes. I have previously bought a front set of Acera V-brakes for Anna's bike, and they have transformed the braking performance. The change over the standard "department store" brakes is remarkable - the lever action required for braking is a LOT less and the feel and overall braking effect is VERY MUCH IMPROVED. I was surprised at just how much difference upgrading to a set of modestly priced decent-quality V-brakes makes.
Anyway, the Acera V-brakes are not on offer (they are just £11.99 anyway), but now the Deore V-brakes are down from £17.99 to just £12.05 per set!
At that price, and based on our good experience with the Acera brakes, I thought to myself I have to get a front and rear set of the Deore brakes for my current bike (Mermaid).

I had a look at a few other bits and bobs, including an Acera chainset (£13 off) and a Dura Ace front mech for just a QUARTER OF ITS ORIGINAL PRICE  - yes that's Dura Ace quality for just over twice the Tourney price!
I didn't buy the chainset and the front mech because, although they are both great bargains, my funds are limited, and I have my eye on converting Mermaid into an "internal hub gear" bike, so I'm not really in the market for new derailleur stuff anyway!

But hey, there is some great stuff in that sale.
Some of it is for me (so I bought a bunch just before I wrote this piece), and some of it would be for you.

Go on, give it a look.
(and it is free UK Mainland postage for orders over £20).

Update 3rd February 2014:
Although the sale has ended, the Revolution Air Track Pump Sport is still available for just £9.99 !!!
Get one now, while stocks last!

Update 4th February 2014:
I placed my order on Sunday morning, and now on Tuesday, just two days later, I have my stuff! 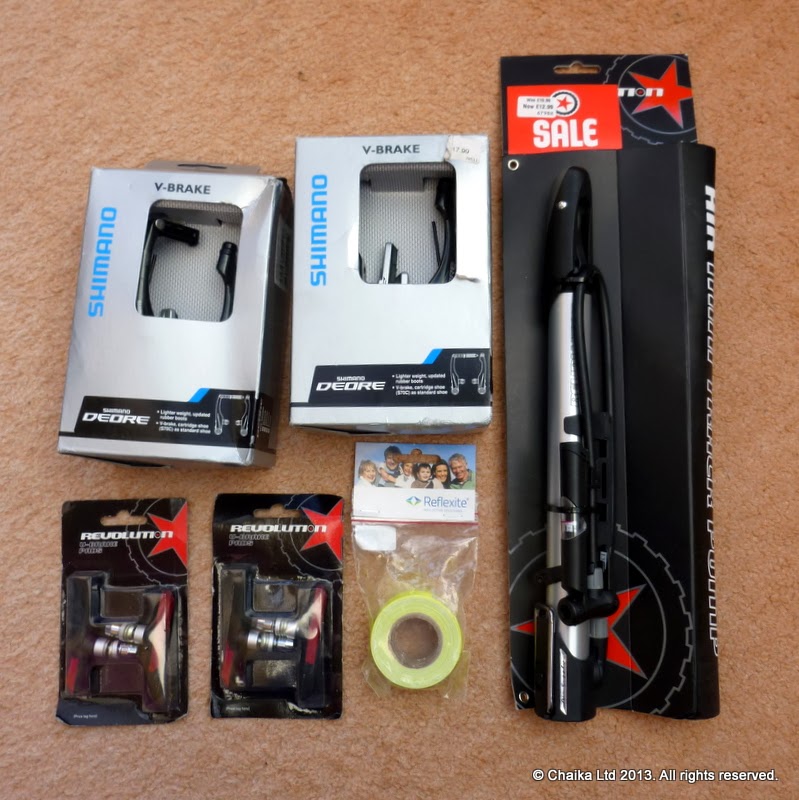