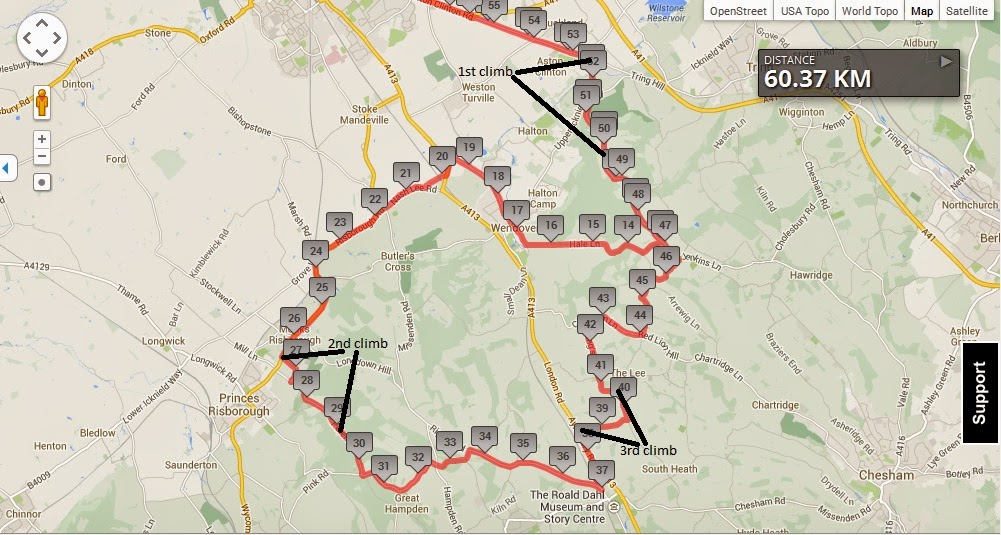 I bring you my ride report from my 60.37 (37.5 miles) km ride two days ago.
I was on Flame, "my" 25kg (55 lbs) 3-speed IGH Pashley Mailstar - although with the pannier of kit, Flame must have been at 60+ lbs again.
The worst hill was the second Whiteleaf Hill, near Princes Risborough, which pushed Flame to the technical limit - I had to stand on the pedals, AND push down on them by pulling up strongly on the bars at the same time.
But then again, Flame has a lowest gear in the low 40's,
But the ride wasn't about speed (it took me 4 hrs 20 mins, including "breathers" and photo stops), it was about building up my endurance.
As I train more, I don't get faster - the hills just get steeper!


I've written about the first climb, up through Wendover Woods before, with its 13% marked gradient, but the tough climb of this trip was the climb up Whiteleaf Hill, near Princes Risborough - I had to take 5 rest stops on the way up (compared with just one going up the hill through Wendover Woods
MapMyRide has previously counted the first hill as a longer, shallower, climb (and made it a Cat 3), but this time has cut out the gentle slope at the start to leave it 13 metres short of that ranking.
Never mind.
And, yet again, a 60km ride on a 55lb (empty) bike gets me in the top 10% for ride distance.
There are clearly a lot of much more fancy bikes that only ever go short distances!﻿
Posted by Pedal Pusher at 09:47