New bike for the new season?

I've been doing my winter dreaming again.
I found a carbon road bike that weighs under 8 kilos, kitted out with Campagnolo Chorus, on clearance, advertised at about £1150 (c. $1600, €1400).
Wow, just wow !!!!
(Not many things in life are worth FOUR exclamation marks!)
Just price up a Chorus groupset to see how great that price is. Worth buying for the parts alone!
But then I thought about it.
For a couple of days.
It's a one trick pony.
Think of all the things I like to do that a fancy carbon-framed road bike is rubbish at.
Getting the groceries with my wife, for example.
Mermaid is a great "errands" bike.
Leaving in an outdoor bike rack at work is another example.
Mermaid is cheap and unattractive to most thieves.
So what would a sub-8 kilo road bike get me?
Well, more than 10 kilos of weight less than Mermaid for a start!
But I reckon I could knock about 3 kilos off Mermaid's weight by:
1) just fitting racing tyres - 28mm tyres will fit on my existing rims, 50 quid, ($70, €60) or so a pair, and would save about 1300g
2) removing the mudguards, which are steel - Velo Orange stainless steel mudguards are listed at 700g, so I guess Mermaid's will be in the same ballpark
3) removing unused/unnecessary accessories. Mermiad has a side stand and one front pannier rack. Plus I keep two locks and 4 lights on the bike, too.
So that is 3 kilos of the weight savings I could make for only a modest expenditure.
The other 7+ kilos I should aim to at least partly take off my bodyweight. With a BMI of about 23, I still have plenty of spare long-range fuel (i.e. "fat") onboard.
The three things that I need to improve (in order of importance) are aero, rolling resistance (Marathon P!us are not the worst tyres in the World, but they don't roll like "race" tyre), and weight.
Weight I've covered.
Rolling resistance would be vastly improved with just a new set of tyres (e.g. 28mm Schwalbe One tyres have a coefficient of rolling resistance just over half that of the 35mm Schwalbe Marathon Plus tyres that are my commuting "staples")
Aero is harder.
At the end of the day, Mermaid has a frame about three sizes too small for me - Mermaid is a "fill-in" built from my wife's old bike, and my wife is 8 or 9 inches (20 to 22cm) shorter than me, so the frame is a "ladies" small/medium, whereas I would take a "men's" large.
If I achieved a nice aero position, my butt would be VERY far back, and my chin would be VERY far forwards.
With a fairly upright riding position, I can wing it with a MUCH longer seatpost, and strange handlebars.
But for aero, I need a bigger frame.
No getting round it.
If I went for a "bike fit", I'd be paying them for the blatantly obvious.
I need a bigger frame.
Then I need drops.
So I'd need new brake/gear controls, too.
But do I need a fancy carbon bike?
No, not really.
A look around reveals that Decathlon, the French sporting goods superstore chain, have their Triban 500se model at £300 ($420, €390). Weighs about 10.5 kilos. 8 speed. Handy, because I have some 8-9 speed parts. Triple on the front. Looks like square taper BB (Mermaid has a triple, with a square taper BB).
Drops, too.
Mixed groupset, with Microsoft levers/derailleur. But hey, I have a Shimano long cage 8 speed and a Shimano long cage 9 speed already (the "8" is on Mermaid at the moment).


Yes, it won't change as well as a Chorus groupset.
But the entire bike costs less than a Chorus cassette and derailleur.
Oh, and as a bonus, the Triban has mudguard mounts and rear rack mounts, too.
So watch this space.
I might just get that Triban, then start to strip Mermaid for parts.
Or keep Mermaid as a commuter, with the Triban for pleasure and Audax.
But I'll think a little longer about it first.
Think twice, buy once. 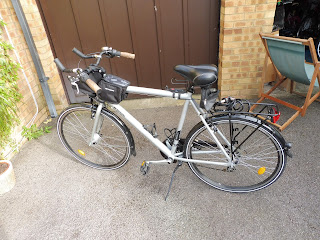 In the end I went for the £230 ($345, €299) Hoprider 300, and then changed a few parts.
(the bars are from Mermaid, the saddle is from Lidl).
You can read the changes I made to get the new bike down in weight a bit here.
The Hoprider takes thicker tyres, and comes with a hub dynamo, both of which will be useful for the primary task I undertake by bike, which is commuting to work. There is still some scope to strip a few bits off, though, and if I made the spec similar to the Triban models, the Hoprider would only weigh about an extra pound (half-kilo) or so. And with a 25kg-rated rear carrier, the Hoprider will be better for shopping, too. The wider tyres will be handy on canal paths, one of the places where I like to ride sometimes.
OK, so not quite as light as a Triban, but get some lighter wheels and some fancy "race" tyres on there, and the Hoprider will manage well enough for my needs.
Posted by Pedal Pusher at 21:06