Today, my wife and I went multi-modal in Oxford, city of dreaming spires.

We drove to the public car park in Summertown, then unloaded our bikes from the car, and cycled into the city centre. I took my Cinzia folder (went it neatly and easily), and my wife took her flat pack "hybrid" bike with fixed basket (took me about 6 goes to work out how to get it in the back of the car without taking any bits off!)
Anyway, both bikes went in the back of the car, with the rear seats folded down. Much more areodynamic than a roofrack :-)
Parking in Summertown carpark, we were lucky enough to get a space next to a "gap" - there is a tree in the carpark, making the space next to ours unusable. Very handy for unloading the bikes ! 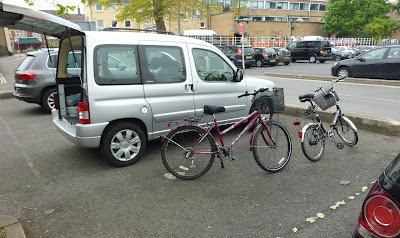 The cycle routes were mostly "quiet road", rather than the off-road cycle paths we are more used to.

Certainly the vehicle drivers in Oxford seemed to be more considerate towards cyclists than the local bunch (some of our local taxi drivers seem to be in training to be kamikaze pilots!), and we remarked to each other about how the Oxford traffic didn't seem to be trying to force itself through the smallest gap.
The 20mph (32 km/h) speed limit on many roads would have helped, as faster cyclists can keep up with the traffic, and the layout of the route involved going through several "no through roads" with bollards and cycle/pedestrian only areas.
I suspect that the vehicle drivers are quite used to a lot of cyclists of varying ability using the roads, and many of them drive accordingly

Locally, quite a lot of folks cycle on the pavement (sidewalk), especially between cycle routes, but in Oxford we saw none of this "unofficial cycle route" activity.

Overall, though, we rated the route as more suitable for adult cyclists, preferable experienced, and we prefer our local off-road "cycle path" routes both for children, and for us.