As I have mentioned before, I ride an Italian bike.
It's a Cinzia pieghevole (Italian for folding bike!).
It is a "real" Italian bike, not just some generic model produced in the Far East with a few Italian stickers on it.
Here it is in all its beauty: 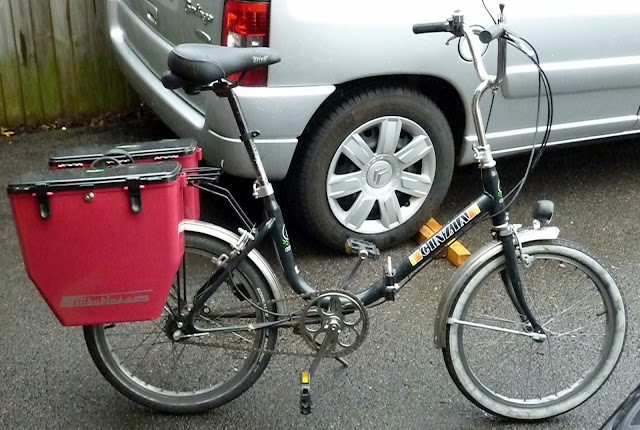 You can read more about my bike here.


The result is that as you pedal, the pedalling action works to try and unscrew the right-hand bearing cup. The harder you pedal, the greater the effect.
This effect is technically known as "mechanical precession".

You know where this is leading, don't you :-)

My "real" Italian bike has decided to loosen its right-hand bearing cup.

There are several fixes to this sort of problem:
1) get a modern, generic Far Eastern made bike - almost all modern bikes use the "English" system for bottom brackets (and pedals), which is to use a backwards thread on one side, and a normal thread on the other side;
2) disassemble it all (again), and rebuild using some special locking compound to hold it in place, then hope for the best;
3) use a large, thin, open-ended spanner, and just tighten it up every now and then.


I went for option 3 !
Just flipped the bike over, and it took less than five minutes (including getting the tools out and putting them away again).
A popular job for the Italian bike owner, particularly if they pedal hard :-)

Update August 1st 2012:
after the "temporary" fix indicated above, the "fixed" cup has stayed tight, and everything (so far) is rosy :-)
Eleven weeks and counting!
Posted by Pedal Pusher at 13:49