This year's weight and training progress 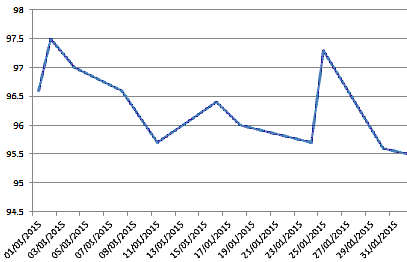 Those of you who read my posts will know that I am looking to lose a bit of weight this year and also that I am training for the London to Brighton ride in late June.

So, with January over, how am I doing?

Well, as you can see by the graphic at the top of the page, while I might try to convince myself that there is a slight weight loss over the period 1st January to 1st February, the case is hardly convincing :-)

So how am I doing for distance and climbing?
Well, the figures are now in!
(I think the climbing figure on Strava is combining both the cycling and the running, but because of the way that Strava smooths out GPS height errors, I have clearly climbed more than the figures give - if I cycle out of the "top" gate at work, Strava thinks the trip home is flat even though it contains a "climb" segment, but if I cycle out of the "bottom" gate at work, which involves a drop of no more than a couple of metres, Strava credits me with a 12 m climb on the route home (which contains the same "climb" segment).
January cycling mileage = 255km
January running mileage = 43km (+134km walking)
January climbing height = 858m

The cycle mileage was showing 254 km last night, and now it is showing 255km, so there must be a bit of adjustment going on somewhere!
The running mileage has also been adjusted up by a kilometre over night, and is now up to 43km, from 42km. Of course, I also walk about 6.4km (4 miles), normally 5 days a week around Buckingham Park, which I have entered as a daily manual entry - so adding that in would give an extra 134.4km (84 miles)!
The climbing height has also gone up by a metre overnight (!).
I wonder if Strava is using a new "rounding" algorithm?
The "standout" session for me was the 5 km run - the first I have done in at least 15 years!

So that is January.
What are my targets for February?
As I outlined last time, I am looking to cycle 250km, run 50km including a 10km run, and climb a total of 500m.

Fairly "soft" targets, but hey, it is February, and although we currently don't have snow we might well have some more before the month is out.
On top of which I have been working 50 to 60 hours a week in January, which bites into my "training" time, and February could contain more of the same ... I am supposed to have a day off on Tuesday (the 3rd Feb), which could make a great training day - but I may well get called in to work at least part of the day. It is not a bad thing - the extra money always comes in handy, but it the "classic" work/training/family thing, which, although there can be an area of overlap, seem to compete for my time.

Given the state of the world at the moment, having a bit too much paid work seems to be a blessing, though!
You can say it is "fate/destiny" or "luck" or "work ethic" or "personal achievement" or whatever - as for me, I'm thanking "The Big Guy" for my "nice" problems!
Posted by Pedal Pusher at 08:37