Testing my new Lidl HRM (and a Nexus 7!) 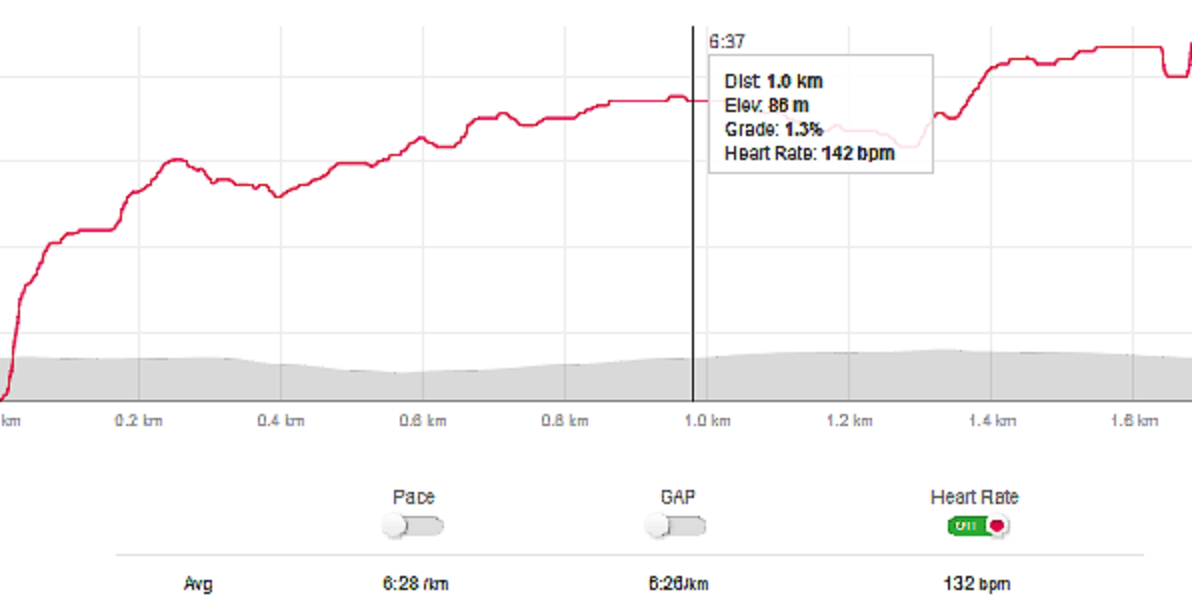 This is the first test of my new HRM belt from Lidl (marked as a "Medisana" device)
The most important thing is ... are the recorded HR numbers realistic?
The "start" number on the left is abiut 70 bpm, which would be about right for me standing about in the cold - the HRM belt measures me at about 50-ish sitting (for a while) at rest, which matches up the the "old-fashioned" way of measuring it using a watch and counting the wrist-pulse.

So I started off slow, and warmed up a bit - it is down, then a slight up, then down, then flat, then an up to the top, then along, then I accelerated and sprinted home. I flagged a bit near the end, realised it and speeded up again (that's what the little down then up is near the end of the trace!).

The HRM matches pretty well with the "perceived" signs - I had previously spot checked my pulse when running (I stopped and straight away used the "old" wrist pulse and watch method - it is a bit easier if you wear your watch with the "face" on the "inside" of your wrist!), and came up with about 130bpm for slightly out of breath, and 140 for it affecting speech quite a bit, so I can only talk in short bits, and about 160 for a decent "sprint" at the end. These numbers match up pretty well with today's HRM readings.
I'm not going to quibble about 1% here or there, and for my purposes the Lidl HRM seems to be more than adequate from an accuracy point of view.

From a comfort point of view, I am not used to running with a restrictive band round my chest, yet at the same time, it always felt as if the HRM belt was only just tight enough to stop the monitor slipping - indeed I half expected it too.
Perhaps this feeling of tightness and slackness at the same time is normal for an HRM chest belt?
As I have bever worn one before, I wouldn't know.
Only times I have been "electrically" checked in the past, it has been with a set of ECG (EKG) wires connected to four stuck-on chest pads, while at the hospital.

So there we are, just a quick first impression.
When I get a phone that can handle Bluetooth 4, I'll be able to test this further.
For this test I used my wife's Nexus 7 tablet - running with a tablet isn't exactly optimum (!), but I must say that the Nexus 7 got a VERY fast GPS fix (from 24 satellites!), and picked up the Lidl HRM sensor really quickly, and gave a consistent and realistic signal - so although it is rather cumbersome, the Nexus 7 makes a surprising useful "fitness tracking" device - the extra big screen is handy, too :-)