I bought this pannier (just one), on sale, for a bit less than 20 pounds ($32, 24 Euros) in August 2014, so I have had it a bit more than four months at the time of writing. Iirc, I got it from SJS Cycles.
The first thing to note is that this is quite a large pannier.
It has a claimed capacity of 28 litres, and is both wider and longer than my other panniers.
To give you an idea of its size, the pannier shown on the left, in the picture above, will just about fit INSIDE the Pacific Outdoor Shopping Pannier.

It is available in several colours, but I suspect that the brown didn't sell as well as the other choices, so that is why it was reduced in price(!).
Nonetheless, I bought it for its utility, not its colour.

I need to mount this right at the back of my rack on Mermaid to minimise heel-clip issues.
The pannier has a second buckle UNDERNEATH so that it can stored folded on or off the bike
I'm not entirely convinced by the secend buckle underneath, but my wife likes it :-)
The pannier is open-topped, with just the strap to hold everything in.
This is, of course, both a "pro" and a "con".
The pannier can be easily loaded beyond it's top (as it the picture at the start of this post), and if carefully packed, and carefully ridden, stuff doesn't fall out. Alternately, a bag, or some such, can be spead over the top of the pannier and tucked in at the sides, then the strap done up over that.

The pannier doesn't have any handle or strap, but it does have a cut-out hole in one side that can be used to secure to your bike with a lock and chain, or whatever. the cut-out hole also fits over the "bag hook" on shopping trolleys. You could pick the pannier up by the loop, too, but I usually do up the strap and pick it up by that instead (!) It is much easier to do when the pannier if full!

The mounts are Rixon and Kaul, and come with "reducers" which I soon removed.
Our Bikebins panniers have a one-piece Rixon and Kaul mounting rail, but this Pacific Outdoor panniers uses a two-part Rixon and Kaul rail. The actual hooks look identical, as is the way they operate.
The only problem I have found is that our thin steel racks have vertical rails that stick out a bit from the horizontal "deck" rails, and the two-part hook mounts can catch on the vertical rail in a way that the one-part rail on the BikeBins design doesn't.
The pannier, because of the two-part design mentioned above is not very easy to get back on the bike while loaded, so I sometimes leave it on the bike, and wheel out the shopping trolley to the pannier.
Anna uses it like this as well, which kind of undermines the point of it having a cut-out that fits on a trolley loop,
But I suspect this problem may be isolated to our luggage racks, and their particular design.
I have a larger-tubing aluminium rack in the garage, and I will see how that gets on at some point in the future.

We have found the Pacific Outdoor pannier useful for moving larger objects - when it was Halloween, a pair of pumpkins went onto the pannier, and only a week or so ago, a local supermarket had a great deal on washing powder (laundry powder), so Anna put on the Pacific Oudoor pannier and got two 2.6kg boxes of Fairy (the brand we use) in it - so that's 5.2 kg (11.5 lbs) in total. 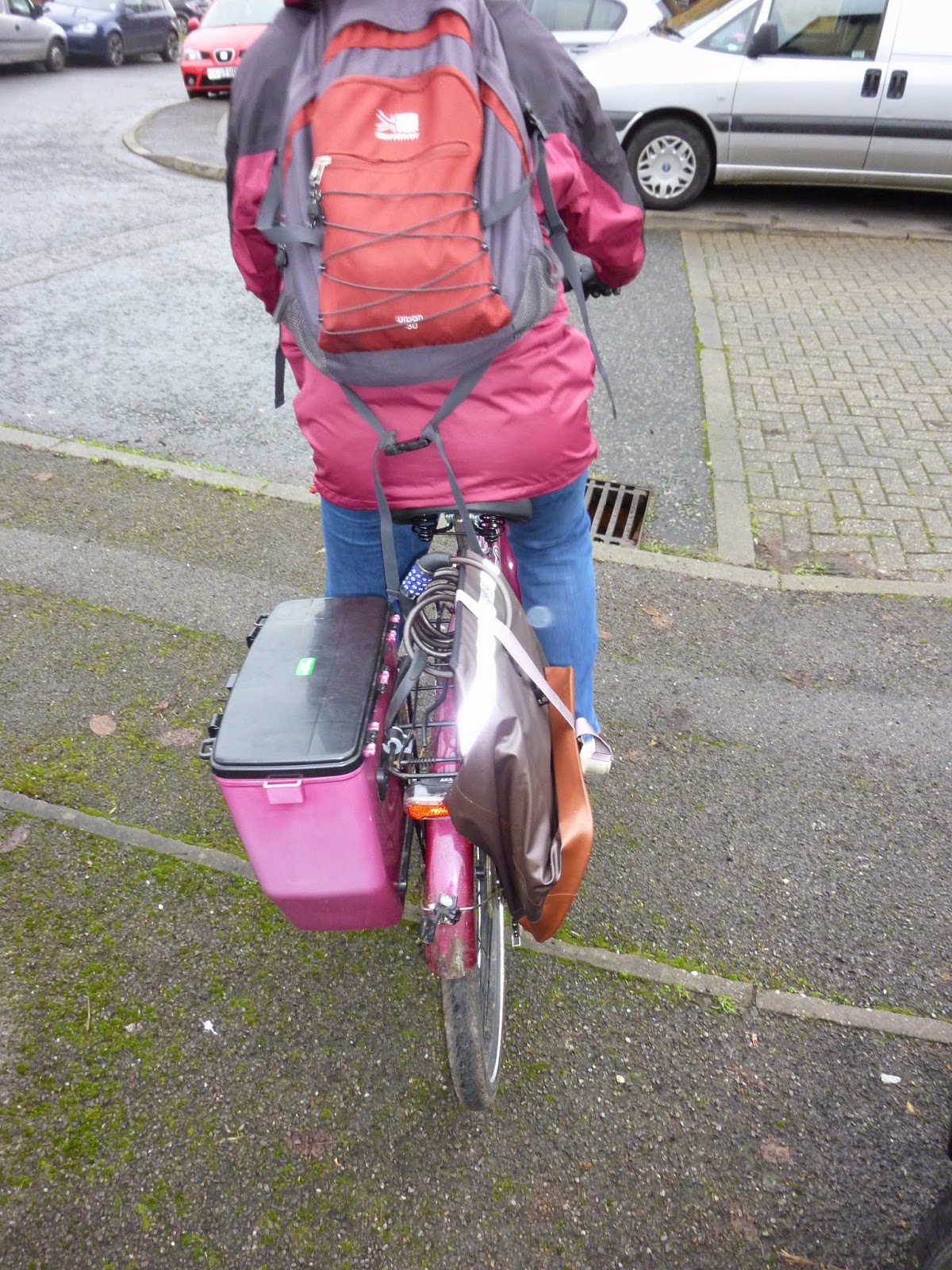